How To Ensure A Complete Bug-Free Mobile App Development 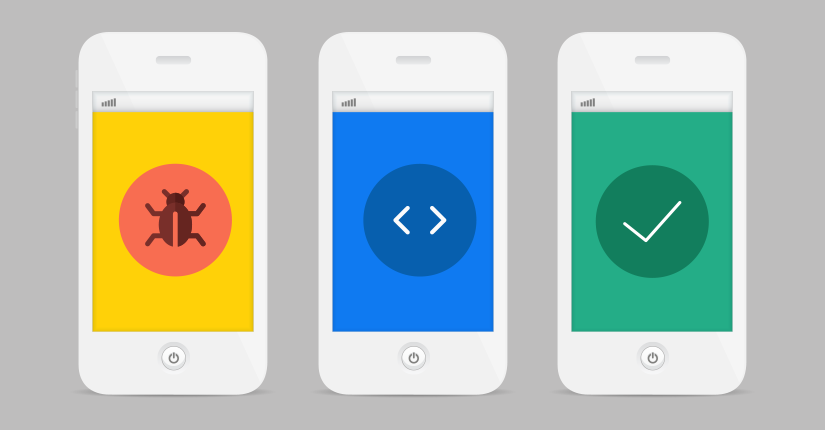 So, if you have been thinking that in your next project you are surely going to impress the client by delivering a bug-free mobile application, then you are wrong probably. It’s a myth that exists in mobile app development in new york. There can never be a single application, which runs without any bugs. Small security problems, bad network connections, handling privacy settings and validating user inputs are some of the common problems, which arises while developing an app. However, with the right strategy, one can easily overcome them to ensure a less bug-free mobile application.

Numerous studies related to mobile application bugs reveal that software bugs support 40% of failures, whereas 60% of them are security issues in an app. Hence, improving the security of an app is the primary way to enhance the reliability of a mobile app. To immune an app from getting vulnerable to virus attacks or any kind of security breach, developers use many tools and imply technology to deliver the best mobile app development in USA. Testing plays an important role here. A properly tested app is a guarantee of a robust product. It creates faith and trust in a client, as he gets an assurity of a quality product.

Identifying architectural flaws and other security weak spots are simultaneous tasks in mobile app development. This starts from the beginning stages of testing to avoid the humongous process of retesting while sending the final application to the client. As a developer, the task not only lies in debugging the issues but also ensures that no third party gets access to sensitive user information. To leave no room for errors, sometimes developers use code from other developers. Though this practice is not illegal, but one should always use the code depending upon the app’s requirements. In a nutshell, reading the code carefully before writing it, is necessary from a developer’s end.

Coming to mobile app security, there are three critical problems, which a developer has to solve – making a device risk free, prevent sensitive data leakage and restriction of risk related transactions. A risk-free device may be susceptible to risk at the time when it allows an app to access all the personal details of a user. As a developer, one can set limits to it and allow only some selected apps to do it. Coming to data leakage, businesses may fall prey to sensitive data leakage. Here, an option for cloud storage would act as the ultimate security measure.

Do Code Reviews – Why?

Reviewing a code from another or a group of developers brings out many fallacies. If you skip something in the middle, another technical person can catch it quickly. Many companies depend on pair programming. Here, two developers write a code simultaneously. The use of code reviews is immensely important in those apps where the role of security related code comes to usage. Hence, advanced coding facilitates in leaving fewer bugs in an app.

Go For Beta Tests – Why?

Releasing the beta version is the most common way of testing the acceptance of your mobile apps by the end user. The benefit is that you can test the application again and again to find more relevant bugs. Users might find issues with different versions of operating systems installed in their systems. Hence, this eases the work of developer for finding bugs. Just make sure that your app has all the functionalities before you give it for the final testing.

Rely On Automated Tests – Why?

Even before you sit down to resolve the issues, determine the kind of problems your users are experiencing. If you have an application, which runs on the trial version, then remember that users won’t get in touch with you. Use automated error and reporting techniques in order to make the process of testing easier. While preparing error reports, one should identify the problem, include log files and version numbers.

Quality assurance is an important thing in mobile app development in USA. You must have numerous testers particularly dedicated for a single project. Sometimes, applications are too complicated and require the competency of experienced testers. Sometimes, it becomes difficult to financially support testers. In such a situation, one develops can test each other’s code.

Use Virtual Machines – Why?

To make a robust application requires you to test it on numerous operating systems and various environments. Apart from testing the application, you will get a plenty of time to test it in various virtual machines. For various operating systems, it is good to make images of standard sizes, test them and then finally upload them on the server. Whenever you want to test, you can use the base images without even installing the OS.

A Good Debugger – Why?

Various web app development platforms such as Python, Ruby and PHP make it difficult to debug. So, an IDE like Visual Studio will give you the best strategy. With a good debugger, you can neutralize the risk of development. No need to identify or solve bugs, changing code parts and a few print statements will do that easily.

Making a mobile application completely bug free is like shooting an arrow at an unidentified object. There will be some issues anywhere or the other. However, as a developer, one can always reduce the number of bugs to bring more stability in the mobile app development in USA.

Are you looking for a reliable company which deals in mobile app development in USA? then let us know your app requirements. Just send us an email at contacts@unifiedinfotech.net.