Are You All Set for the Big Billion Event This Year? 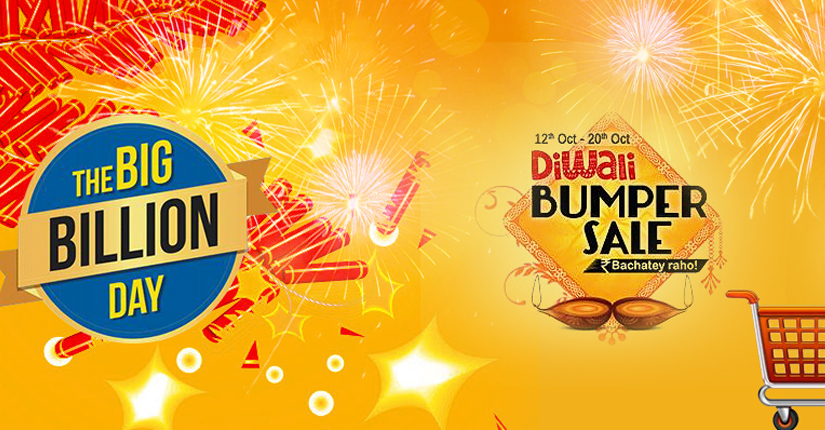 The host of pop-ups & banner ads splashes right in front of you during dedicated hours of browsing with tempting sales messages like above. And on your part, you cannot resist clicking, rather do a little window-shopping or add items to your online shopping carts (if you have accounts).

With cash flow from recent fund-raising efforts made Indian e-commerce companies lineup with the big flash sale, discounts, exclusive merchandise, and cash-back schemes for this festive season. Indian market viewed it as an opportunity to sell more and gain more market share and forces a tough time for the brick and mortar stores for upcoming Diwali & Christmas.

Today, the Indian e-commerce industry is no more nascent rather it has grown up to a $3-billion e-commerce industry, ready to cash the opportunity and make a dent in the offline sales channel. The festive season that began in September at India with Onam, Dussehra & Diwali will be ending in January with harvest festivals in the Southern States. This season is going to capture a large, high, valuable and captivating sales slope gradient.

Online shops are growing as a favorable option in the Smartphone era as it allows shopping decently from the crowd of brands, no need to shop physically and glue to exclusive offers sitting back at home. Shopaholics of today has convinced the online retailers since the beginning of the year 2014 that this Festive Season would be the best ever, making them expect to double sales with clothes, accessories, home appliances, electronics, etc.

The Cart Race Has Begun…

Yes, Flipkart, Amazon, Snapdeal, Jabong, Fab Furnish, Myntra, Yebhi, YepMe are ‘on their mark” and the gun has blown and they are working hard to touch the finishing line by the end of January. The crackers of Diwali has started to blow and the first lap is no doubt won by Flipkart with their “Big Billion day” Sale on Monday 6th October that has hit $100 million GMV (gross merchandise value) in 10 hours.

Snapdeal and Amazon were not behind as both launched their sales campaign on Monday following Flipkart’s Festive Offer. The former mocked Flipkart Ad on Monday with their banner tagline: “For others, it’s a big day. For us, today is no different.” And Amazon has been running a sale from 4-6 October, calling it the Mission to Mars weekend and unleashed another sale called “Diwali Dhamaka Week” to keep up the race. Smartphones and footwear have shown the highest in demand this festive season, followed by laptops, tablets, and home appliances & electronics.

Brick-and-Mortar Stores has started to feel threats and scared at seeing customers take bathe in the festive fever of online retail shops. They are increasing discounts and promotional schemes this festive season at the cost of a significant hit to their margins.

Flipkart and its rival Snapdeal put up all ideas to woo customers in a time when it is crucial to justify the actual winner of the Cart Race rather than witness soaring values. As for Amazon that made a new entry is matching every step to win the hearts of Indian shoppers.

The daily likes of online shops such as Flipkart, Amazon, Snapdeal, Jabong, and their polished algorithms sharpen their know-how on shoppers buying conscience and as for the brick and mortars such as Future Retail, Croma and Shoppers Stop, they tend to be Omni-channel — selling both on and offline to improve the shopping experience.

According to Technopark, Indian retail e-commerce sums up to USD 2.3 billion, a nascent stage accounting for only about 0.4% of the entire retail industry, but estimated to reach USD 19 billion by 2019. With the upcoming festive season, the online retail shops are going to take a giant leap.

What the Industry Says….

Biyani of Future Group believes any product, which is easily identified with a model number, will be sold more online than offline. Like Google Moto phones, that sold out online by Flipkart and not in any retail outlet.

According to Sachin Bansal, co-founder and CEO, Flipkart, “E-commerce solves the problem of access by making millions of products available to shoppers with a few clicks.” Bansal adds further saying: “Those who prefer to touch and feel products, and that is still a majority of shoppers, will go to the shops.”

Now the most important question comes – after a sales glitch faced by Flipkart due to the poor website usability of the Big Billion Day campaign has India really made the e-Commerce move??

For the past few months, the retail giants have been asking it and Flipkart’s soaring success raised a little hope, but failure in maintaining the website, poor customer service, shortage of stocks, and network problems showed flaws in the big e-commerce move. It shows we are not yet ready for the e-commerce boom like other countries. Then, why a foreign investor would come to us?

Another example of constricted sales habit depicted by Amazon, which decided to limit delivery for Orders above INR 5,000 in Uttar Pradesh due to rumors of fake orders that abused the Cash on Delivery (COD) facility, and pushed Amazon to take this stand. This is seriously a constraint in the path of rising e-commerce economy.

Economists predict that this is the “year of the retailers”. The e-commerce websites are going to perform better, compared to last year. With the presence of an optimistic e-commerce marketing overview and consecutive sub 5 percent growth in the last three years, the country seems to scale new heights with a GDP of 5.7 percent in the first quarter. Further with the launch of the ‘Make in India’ campaign, the Indian manufacturing sector tends to attract more foreign investors, which is likely going to favor the growth of the Indian e-commerce market. (At present, foreign investment is only permitted in the wholesale market and not in retail e-commerce).

Experts believe that we made the big e-commerce move and have the zeal to serve the best, but we need to consider the higher Internet penetration, rise in the number of Smartphone devices and users, and computer literacy. (Some eminent factors that could make or break e-commerce sales funnel) E-commerce is a big supply chain and in a country of population 1.25 billion, the potential growth of such industry is high if you can analyze the buying trends and behaviors of the shoppers.

To be successful, online shopping carts must strengthen and exhibit three pillars of success:

So if you join the movement, then you need to fix those bugs or revamp your sluggish website to grab the festive market.