Android A to Android M 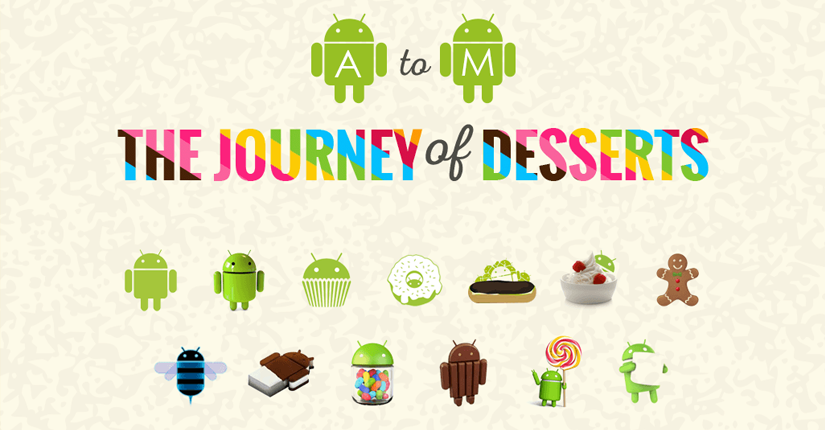 Android era officially took a kickstart on September 2008, when the T-Mobile G1 launched in the United States. Android is the operating system of Google that powers more than billions of Smartphones and tablets. And it’s Google after all, so how can you keep away their sense of humor. As the Smartphones sweeten up the human life, they thought to add a pinch of sweet condiments by codenaming their versions after desserts, just as Intel names all their CPUs after Rivers.

We thought to take you on a journey across the Android versions development down the ages in this seven years and see how big are the changes. Android apps development is taking huge leaps and developers are eager to fetch a new version every year to explore their crave to develop something new on the Android OS.

Take a ride of Android A to Android M’s journey with us in a visual manner and gulp the facts that made Smartphones add sweetness in the life of human thus making them grow smarter.

Check out some of the cool features, which Android integrated down the years and made their version sweeter than the previous.

Android A and B

Android started their journey with Alpha and Beta versions (may or may not be codenamed as Apple Pie and Banana Bread). Based on the Linux kernel was put in use by the Open Handset Alliance, who started working on Android OS. HTC Dream or T-Mobile G1 was the first phone maker to get a real consumer phone.

Moreover, after that they have a bug fixing and released the second version called Beta in February 2009, where they changed the Android API.

Technically, Android got into dessert codenames from the cupcake. The version Android 1.5 had some major upgrades with the integrated third-party keyboard, Widgets, and the phone could upload directly to YouTube and Picasa.

Android 2.0 that had an official release in October 2009, with a bug fix version (2.0.1) December 2009 and 2.1 versions was out by January 2010. They have added features such as Bluetooth 2.1 support, flash and digital zoom for the camera, multi-touch support, live wallpapers, and more.

It released in February 2011, rapidly followed by 3.1 and 3.2 updates in July and August of 2011 and was the first version to arrive on the tablets. They tried to ride the wave of the iPad’s success in time and Motorola Xoom was the first Android 3.X tablet to be released.

It was an attempt from Google to synthesize Honeycomb, and it’s tablet-only platform, with its mobile platform. They featured a new design, default font, ability to monitor and limit mobile data usage etc. Samsung Galaxy Nexus had been released to run it.

The Android 4.3 came out in 2012 and the biggest changes were witnessed in Google’s now. It had many interactive notifications and allowed voice typing with a built-in speech-to-text engine that does not rely on Internet or data.

Google announced Android 4.4 on September 3, 2013. KitKat’s parent company, Nestlé, was fully on board with the naming of operating system. KitKat improved ‘Google Now’ feature and took it a step further with “Ok Google” that allows people to access Google Now without even touching their phones. Just verbally saying the phrase opens up the artificial intelligence assistant. KitKat also introduced Emoji to Google’s keyboard.

Android L or 5.0 called Lollipop features a brand new runtime called ART that no longer relies on the older DALVIK runtime. Lollipop introduced the Material Design, a brand new user interface and has an excellent battery life on some devices under the codename, Project Volta.

Android M or 6.0, the latest version got unveiled in Google I/O 2015 and for now it has advanced to Nexus 5 and Nexus 6 phones, the Nexus 9 tablet, and the Nexus Player set-top box. They have integrated fingerprint recognition to authenticate Play Store and Android Pay purchases and have yet more updated features, which we need to wait for the next purchase.

Join the Revolution in mobile with Android!