Want Your Android Device To Stand Out? 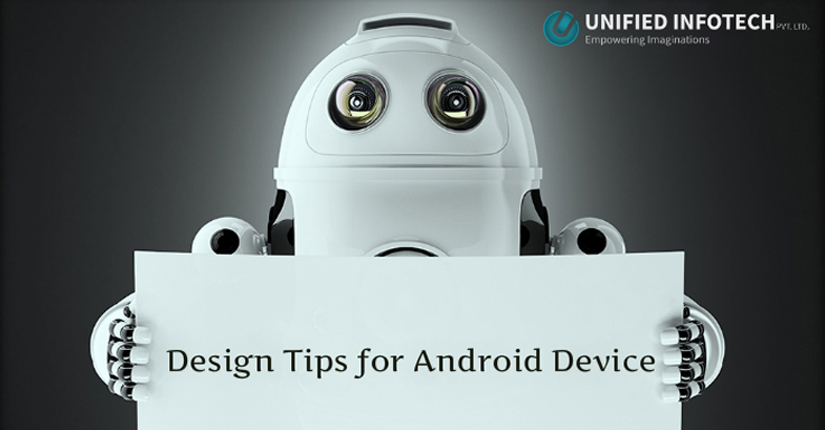 Designing a user interface does not solve the purpose of a great UI experience. An android application development company has to keep in mind about the different kinds of screen resolutions of the android devices and design accordingly. For instance: the UI design for a Smartphone with less than 600 dpi will be different from that of a Tablet with more than 720 dpi.

UIPL has come out with awesome UI designing tips for android devices that will totally stand out from others.

Screen density is an important area of consideration, which is to be taken into account while designing for an android device. Most of the time designers only consider the screen size, but they forget that it is the density of the screen, which means the dot per inch (in technical terms DPI) that matter the most. For instance: Nexus One and Nexus 5 have the same screen size but they vary from each other when it comes to screen density. While Nexus One has a pixel density of 252 DPI –HDPI, on the other hand, Nexus 5 has a pixel density of 445 dpi-XXHDPI.

Sometimes a button with a certain pixel might appear small on a high-end android device. One can overcome this problem by opting for density-independent pixels. Thus, the images will appear as a standard size on a variety of android devices starting from a Smartphone to a Tablet. Always keep in mind that images play a very vital role in creating a rich UI experience. Hence, it is the responsibility of a designer to optimize the images depending upon the screen density of a device.

Thousands of images and layouts are created for devices with different screen resolutions and densities. This always creates confusion among designers; hence, it is recommended that you always maintain an alternative resource folder for individual screen density. Keep DPI as the base density and you can easily store the images and layouts in drawable folders that are most appropriate for you. When it comes to basic android mobile application development, alternative resource folders ease your work.

Always design multiple layouts for different devices with various screen densities. An Android Phone scales all the bitmap drawable as well as Nine-patch drawable in order to optimize the layout with the size of the device. However, the functionality differs in case of an Android Smartphone and Tablet. In the settings section of Android, the list of settings and the details will open in a different screen on a mobile phone; whereas, in a Tablet, the setting list and details will open side by side. One mistake that is committed by UI designers is that they use activities individually, as a result of which three types of problem rise – the risk of tight coupling, intent filters, complicated intents and security issues.

Every fragment has its own life cycle. It is hosted by a number of activities and can be replaced anytime with another fragment. The interesting thing is that the fragments are hosted within one activity without any interrelation between them. In order to create a dynamic UI, convert the components and activity behaviors into modules. These modules act as a nested activity that defines their layout and manage the lifecycle.

List and details are displayed in two activities in a mobile phone. The folder structure should be designed in such a way that it contains both the list and detail activity. To have a clear directory structure, always maintain the list fragments in ListActivity.XML folder and the detail fragment under DetailActivity.XML folder. It is important to keep in mind that the directory structure of a Tablet is entirely different from that of a Smartphone. The resolution should be kept at 600 dp and the ListActivity should contain both list and detail fragment.

In order to identify the layout that has to be inflated, Android OS takes out the layout from folders on the basis of the width of the screen and inflates it on the basis of that particular layout. The OS first determines the drawable folder and if it doesn’t find any relevant images, then it transfers the images to a lower level folder.

Android has a flexible framework for a better user interface that helps users to view the apps or any other information in different devices. With the constant evolution of mobile technology, new challenges are emerging for UI designers. With the frequent changes in screen resolutions and their dimensions, it is time to take a big leap in UI designing. The designing tips mentioned above are simple and if followed will definitely start a new era in the field of UI designing for android devices.