Back in 2008, Apple announced and released iPhone SDK 2.0. With this event sparked yet another revolution in software development, giving birth to a new breed of developers, called the iOS developers.

Many developers among them never used Objective-C prior to that and it was the first challenge Apple blew out to them. Despite the unfamiliar syntax and manual memory management, it was successful enough to populate the App Store with ten thousand apps. Apple kept on improving Objective-C and with each release, kept on adding block and literals, simplified memory management with automatic reference counting, and many other features pinpointing a modern programming language.

In 2010, when iPhone was just 3 years old, the ability to code native apps was still nascent and iPhone came up with version 4 of the iPhone OS that included tantalizing new features like multitasking, fast app switching, and background services. Apple came back with a bombshell in iPhone OS 4 SDK and it was not in the software but in the usage agreement. It stated –

“Applications must be originally written in Objective-C, C and C++, and only code written in C, C++, and Objective-C may compile and directly link against the Documented APIs.” – Section 3.3.1 of the iPhone OS 4 SDK Developer Agreement.

This new restriction took developers by surprise, but we heard Steve Jobs claiming it as a step to prevent the usage of cross-platform tools. However, Objective-C contributed largely towards the growth of the app ecosystem, but many developers started feeling dissatisfied in 2010 as a result alternative ways to write iPhone apps in other programming languages were cropping up.

After working with Objective-C for past 6 years, Apple decided to throw away yet another challenge this year in 2014 at WWDC. Yes, once again the iOS developers will need to learn an entirely new language called the Swift. 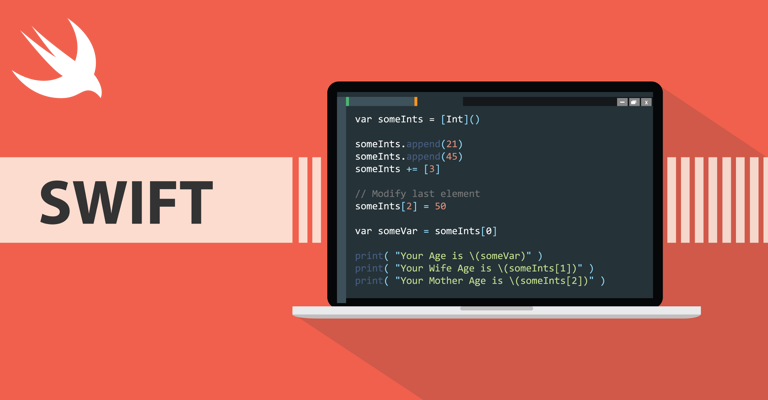 Four years after 2010, Apple introduced developers to its new language, Swift. And this proved that Apple was ready to accept the truth that Objective-C might not be the best language for writing mobile apps. Swift is more a modern language compared to Objective-C. If new to Swift then you would have keen interest to know how to move from Objective-C to Swift.

You would notice two important differences between Swift and Objective-C –

Swift is not a strict superset of the C language – This denotes that Swift is free to make use of syntax constructs that was not in use. This helps to implement custom operators in Swift.

Swift is not dynamically typed, but typed statically – Statically typed means you can take the advantage of pioneered languages such as Haskell.

In order to start exploring Swift you need to download XCode 6 from App Store and start experimenting. You can go to the home page of Apple’s Swift to find the best reference to facilitate Swift Development Services. To create a playground for your Swift Development here is a guide –
Variables and Constants
Declaring a variable in Swift profusely uses the VAR keyword.

We choose two variable “y” and “z”. Swift is a safe language, it will deduce variable types from the assigned values. If you wish to make codes more readable, you can annotate the variable’s type.

Constants are more or less similar, but you declare them using LET instead of VAR. The value of a constant does not need to be known at a compile time, but you must assign the value once.

As their number suggest they are immutable so following the code is surely going to cause a compile-time error.

You can also declare other types as constant. As in this example, you can find that the following code an array declared as constant and if you try to modify it, the Swift compiler would fire an error:

Other types can also be declared as constant. For example, the following code declares an array as a constant, and if you attempt to modify any of the elements, the Swift compiler will report an error:

You need to initialize constants when you declare them and for variables, you need to initialize them before you use. You cannot find it in Objective-C, but in Swift since optional values can have a value or be nil, but Objective-C cannot be nil equivalent. Look at the following code you will notice that that “x” assigned an optional value of 2015 at the same time this means Swift compiler was aware that “x” might be nil.

If you introduce changes in this code and assign value “xyz” to “s” which cannot convert to integer, you will notice that “x” becomes NIL.

The return type of “toInt()” function is “Int?” which serves as the optional “Int”. Let us now consider a standard function on “x”:

Now the compiler sends signals as error, since “x” is optional and potentially NIL, we have to test “x” first and make sure that the successor function invokes a real number and not a NIL value.

We have to unwrap “x” by appending it with an exclamation mark (!). When we get sure that “x” contains a value we can easily access it, otherwise we can get runtime error. We also perform that function which Swift calls as optional binding, converting optional into a non-optional variable.

The code will run if the “x” has a value to execute and will assign it to “y”. We do not need to unwrap “y” for that, as it is not optional as “x” is not NIL.Look at the Apple manual to read more details about Optional Chaining.

String Interpolation
When you use Objective-C, you usually do it with “stringWithFormat:” method

Swift has a feature called string interpolation to do the same function, but it is easier to do and refined.

You can also use expressions such as:

Functions
From Objective-C, the definition of function is different in Swift. Here is a sample function:

In Swift, the functions are of first-class types. This indicates that you can assign functions to variables, pass them as parameters to other functions, and make them returns types:

Again, in Swift you will find types of f1 and f2, although it is not possible to define them explicitly.
Functions can also return other functions:

Get to know more about functions at Apple’s Library.

Enumerations
Enumerations in Swift are powerful compared to Objective-C. Swift easily forms a structure, they can have methods to lie down and passes value:

Compared to Objective-C, the enumerations in Swift can assign Strings, characters or floats as values for each member apart from the integers. You can find the convenient “toRaw()” method that returns the value assigned to each member. Enumerations also include parameters –

Get information about enumerations here.

Tuples
Tuples are a group of several values turns into a single compound value. You can find that the value within the Tuples can be of any type and do not have to be of same type as each other.

You can also name the individual elements in Tuple:

Tuples are extremely convenient options as their return types for functions that return more than one value.

Swift supports a pattern matching a switch statement, which you cannot find in Objective-C.

In the second example, we do not look into the number, so we use _ to match. You can also check additional conditions in each case as well. For that instance, we need to bind the pattern value to constants:

To know more on Tuples browse the Apple Library.

Classes
Swift does not require creating separate interfaces and implementing files for customized class or structures. In Swift, you can easily define a class or a structure within a single file and the external interface to that class or structure is made available automatically for other code to use.

The compiler will report the label is a non-optional variable and will not hold any value when a Bottle initialize.

Well, we can also use optional type for a property we do not need to initialize that. In the following example, we made volume as the optional integer.

Structures
Swift also has structures just like Objective-C but it more flexible. Look at this example to get to know what structure defines in Swift:

Swift has structures that have methods, properties and intializers and some protocols as well. The difference between classes and structures is that classes pass on reference but structures pass by value.

If we try out the similar case for instance with the structures, you will notice that it will pass by values:

Now, a question arises when we should use class or structure. In Objective-C and C, we used structures when we need to group multiple values and copy them rather than reference For example, complex numbers, 2D or 3D points, etc. However, class is traditionally the object. In Swift, we have seen that class and structure compared closely to other languages and much functionality can apply to either of the class or structure. As a result, general term used in Swift reference is “instance” which doth applies in any of these two.

You can read about Classes and Structures of swift at Apple Library.

Finding the Compatibility of Objective-C and Swift

Swift is evolving daily at Apple’s Lab. You would come across a number of new things to learn about Swift. These include Generics, interaction with Objective-C libraries, closures, optional chaining, and operator overloading. It is not possible to discuss all of them in one article to describe thoroughly a new language.

Well, this quick read will help many developers get to know Objective-C, especially for those who have not yet managed time to learn details of Swift language can get on track.