AngularJS Development or Ember.js – Which Framework To Go For? Here’s Our Guide 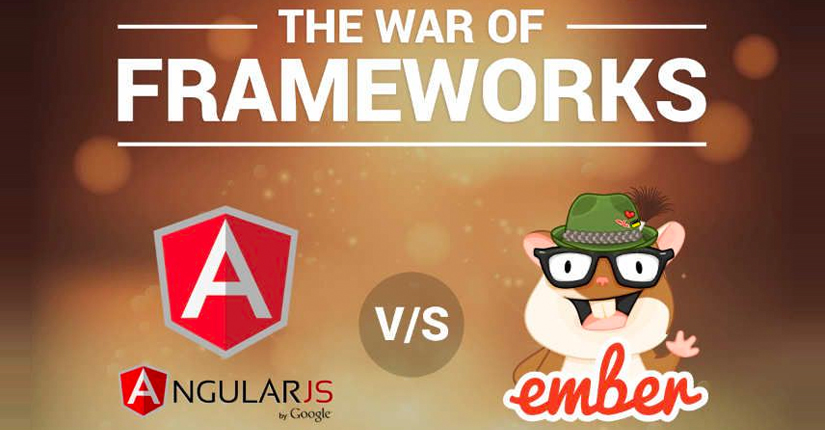 Planning for a major web application release in the near future? Deciding the web frameworks is one of the important characteristics. The presence of numerous other frameworks in the market along with strong libraries is also a factor that is to be kept in mind. Well, if you are thinking about the long-term benefits, then there is no doubt that frameworks like Ember and Angular prove to be the most fruitful ones, but when it comes to taking a business decision, then it is often confusing as one is not able to take the right decision.

Team Unified will clarify all your doubts that arise while you are planning on how to select a good framework. Our many years of experience whether it is working in angularjs development or Ember js have made us capable to help you take the right decision.

AngularJS – What are it and its usability?

Based on the simple modular code, this framework successfully expands the functionality of HTML thereby solving the problem of SPAs. It’s helpful features help to solve some problems such as simplifying syntax with the help of vanilla JavaScript objects, developing DOM with directives and creating dependency injections. It acts as a catalyst and helps the application to run quicker.

In addition to this, it also supports the MVC architecture. The two-way binding process is yet another feature that reflects any changes in the view. With the help of Angular Directives, you can also extend the functionality in the existing HTML elements.

The good news is that the latest version (AngularJS 2.0) is set to ease the process of web development. It comes charged with a host of powerful features. Take a look at them:

Making inroads in the industry

Owing to its flexibility and great features, the framework has found its place in many well-known online ventures. Some of the most notable ventures are Freelancer.com, Netflix.com, Upwork.com, istockphoto.com and YouTube PS3.

Ember.js – What are it and its usability?

An exceptionally great framework, Ember.js is an expert in developing beautiful and dynamic SPAs. It works on open source frameworks such as Backbone.js and Ruby on Rails and makes an open-source JavaScript framework easier. Some of the key features that make it stand apart from AngularJS are the use of accessors, string-based system of template, complex and powerful routing. The string-based templating system makes it possible to have faster boot times by compiling templates on servers.

Ember.js 2.0 is also in the lineup as the second version of AngularJS. A host of interesting features also awaits here. Let us take a look at them.

Some of the notable companies that use ember.js are Yahoo, Yapp, LinkedIn.

One of our notable works in AngularJS

With AngularJS, one can make the impossible, possible and we have been successful in providing an unavailable custom-based solution with the help of this wonderful framework. We created an online open-source music player – one 1daytrack, which was able to play music online in all types of browsers starting from Safari to Internet Explorer, Firefox, and Chrome. We used AngularJS for front-end development.

Some of the glaring features, which we were able to add in 1daytrack are as follows:

A multi-platform music portal, which would run in any browser

Create a proper track queue management system to enable the listeners to listen to all the previous tracks.

An auto adds a feature which would allow the listeners can automatically add the last played song in a particular category.

View the profile of DJs, book any one of them and get access to all their social media accounts.

And the winner is…

The purpose of Angular and Ember.js is the same, which is to make dynamic SPAs with interactive UI/UX to make the process of web development easier. Both of them offer facilities such as modular code, easy unit testing, DOM manipulation and various benefits of the MVC architecture.

Hence, talking about the best frameworks between the two is really difficult as the two of them emerge as the ultimate winners in their areas of strength.

AngularJS is the best framework to work with if you are working on a project from the initial stages and the app which you want to develop is smaller in size. You can work with the vanilla JavaScript object while applying the coding speed. Even if you want to manipulate the extended DOM with an HTML syntax, even then it is possible. Moreover, the second version of this framework has a host of benefits (as mentioned above) and will subsequently fasten the web application development process.

On the other hand, Ember.js can be of great help if you want to make the SPAs of your application right from the beginning. This framework was mainly developed in order to reduce the burden of coding from the shoulders of the developers.

With faster boot times and fixed stability, this framework allows your application to be smaller thereby making it run even slower. Well, with the release of its second version, Ember.js is expected to boost the server side rendering further.

The future of both these frameworks is brighter. Even the upgraded versions of the frameworks will be stronger, faster and will support server side rendering. One of the interesting things which are common among the two of them is that both of them support iOS and Android. If we can do so much right now with these modern frameworks, then one can imagine the kind of possibilities that can be created.

The word is moving today at a blazing fast speed. AngularJS and Ember.js will no doubt help to keep the pace of web development in tandem with this moving speed in the world of technology.