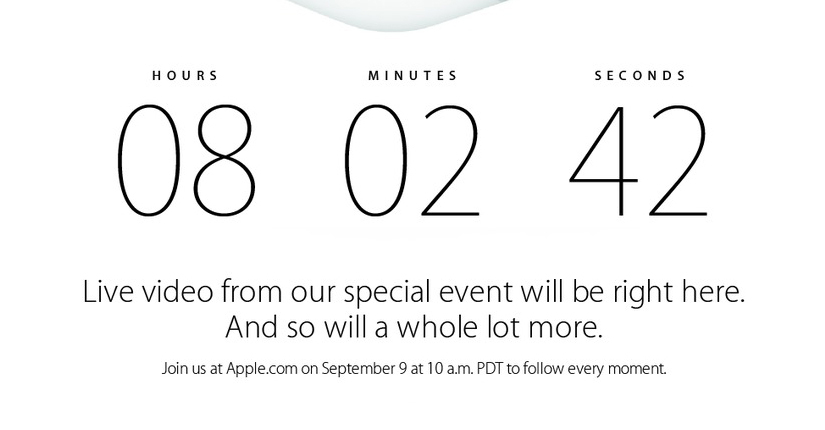 The big day is almost here, 8 hours left before the Grand launch of Apple iPhone 6 and iWatch at 10 A.M. (PDT). Prior to Tuesday’s event, we wanted to do the one last rumor roundup of plausible Apple devices that make its way on September 9. It was one of the big weeks of the year in the tech industry, with Apple fanatics holding high expectation with the grand release. Moreover, this year the company is going to announce even more iThings than they ever did.
Apple Inc always keeps their mouth shut ahead of the product announcements, so air of rumor builds up months ahead of the event. It was the same this year, so we thought to list the loudest whispers, just for you –
Watch the Event Streamed Live
No, this is not a rumor! But definitely, it is going to make and break all the high anticipations that build up in this few months. The event would start streaming at 1 PM Eastern on September 9, as Apple CEO Tim Cook takes the center-stage of Flint Center in Cupertino, CA. (30 years before Steve Jobs released Mac at this same place) People can watch the event streamed live, directly broadcasted from Apple’s Official Site: www.apple.com/live.

Two Models
Well, Apple is going to launch a pair of iPhone’s, a 4.7-inch version and a 5.5-inch version. For users with small hands, developers say to have one-handed mode that rejiggers interface to help users get everything in reach, you can find a similar feature in the larger phones of Samsung.
Whereas, 5.5 inch is going to facilitate users with expanded display, which can be of great help to apps enlisting themselves in an iPad fashion with the use of iOS8 dual-pane feature.
Rumors about Launch: 4.7-inch version might release first, prior to 5.5-inch version that would come later in this year. As for recent launches, iPhone would be typically available for a couple of weeks that means 4.7 inch would roll for some time in September.
Designs
The new iPhone is going to sport curvier designs than their previous models, would have tap-to-pay features, 128 gigabytes of storage (current models have 64 gigabytes of storage) and a built-in barometer that ties with the health and location apps.
Sapphire Glass Display
There have been rumblings about sapphire crystal display in iPhone 6. A hard material of sapphire often used for watch faces is durable and resistant to scratches. Back in January, Apple CEO Tim Cook confirmed about the use of Sapphire Glass display, but Apple analyst Ming-Chi Kuo believes that the screens are not yet ready for large displays. He thinks it might line up in the much-anticipated iWatch. (Ming, just few more hours left to see the real, so let us wait)

iWatch (Original Product Name not Yet Leaked by Apple)

Apple will also pull out from their bag long anticipated Smartwatch, the first wearable device from Apple. However, rumors tell that it would not be available for purchase until next year. Apple is famous for making products available in weeks after unveiling, but with this new release, they have adopted a different strategic approach. iPhone had a curtain raiser six months earlier and iPad came out two months earlier giving time to develop apps. And for iWatch the strategy remains the same.

Apple shared no word about the pricing of iWatch; however, the market guesses an apparent price of $400.
This was the small briefing of the rumors on air since last few months, now it is time to stay calm and wait for the Grand Curtain Raiser of iPhone6 and iWatch (or whatever it may be called)