iOS or Android – Which Operating System Will Bring More Revenue? 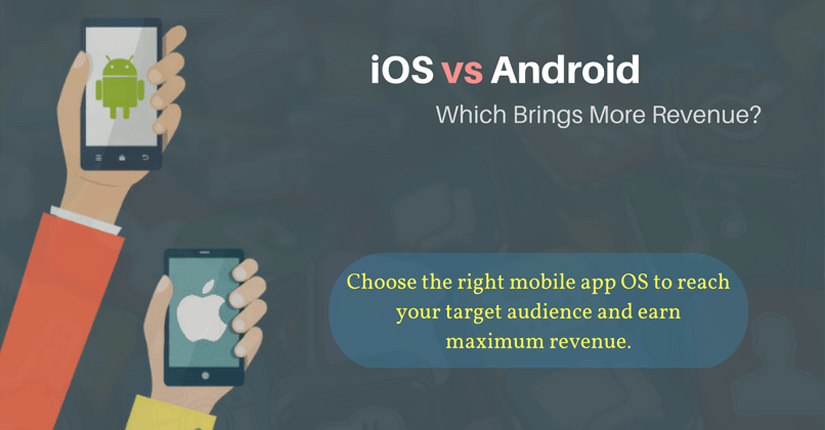 A hybrid or a native application is the first thing that comes in the mind of developer. Once decided, the next question, which looms in mind is the operating system. Android or iOS?  From a business perspective, even the entrepreneur adopts a profit-oriented approach. At the end of the day, all that matters is business revenue. A mobile application development company finds strategies to deliver the best possible solution. Yet, when it comes to giving business solutions, then they are a bit skeptical. The later paragraphs will help you to choose the right platform. It will help you to develop an app in the best manner.

A Strategic Approach to iOS and Android Development

There is a line when it comes to developing for iOS and Android. Apple relies upon Xcode IDE for most of its app development work. Swift is the programming language which most of the developers depend on. It offers plenty of opportunities to the developer to create a robust application. It works with Cocoa Touch, an API that is helpful for creating the UI elements of iOS. So, Android comes as a great solution as it is a Java based OS. With Android Studio, developers can do more things. Thus, either Android Studio or an Xcode is the ultimate choice.   A mobile application development company can use them for better results.

Coming to design guidelines, both the OS are moving towards new designs. Flatter designs are the main things which both of them have adopted. Material design is something, which Android has adopted pretty well. Large images and transitions are the main elements in iOS design. User interface is the primary element that decides about app designs. Moreover, when it comes to navigation, there are differences in both the mobile OS. While Android consists of back button but an iOS has no such things. For a mobile application development company, it is important to design them. Following clear design guidelines will always fetch the best results.

Today, the mobile app market is worth $77 billion. With the increasing penetration of mobile device, it will expand further. Businessmen spot an opportunity here. To develop user-oriented mobile apps, an interactive app is the only solution. It all depends on the need and the operating system for which you are developing the app. Moreover, you need to keep in mind about the target audience too. Once you understand the customer base, you can start developing a mobile application. Yet, you need to know which operating system is suitable. We will discuss it in the later paragraphs.

Android or iOS – Which Will Bring More Revenue?

Once you have finalized on native or hybrid, it is necessary to determine the platform. In other words, the operating system is an important consideration. One might be skeptical while starting out about the operating system. Yet, we will present a clear picture in front of you. This will help you to determine how a business can enjoy from iOS and Android.

A mobile application development company needs to take many protocols. You need to find the answers of five basic questions. They will definitely help you to find the correct answer.

What Is The User Base?

Android control about 80% of the global app markets. But, iOS users spend more on the in app purchases. So, as a businessman you have to decide the target market. Either focus on mobile user base or those who spend money on an app. The global smartphone market is expanding in sync with the iOS. But, you must focus on your target audience first.

Is Your App Paid or Free?

Or do you have any plans in future to make it a paid app? You need to know about upfront monetization and in app monetization. The two of them work for iOS and android, respectively. Most of the mobile apps generate revenue through in app advertisements. If you are confident that your app can do well, then go for ads driven app to get good results.

What Is The Lead Time?

Do you know that Android apps take much longer time than iOS? Yet, it might vary according to the functionalities and features. Have a discussion with the developers, once they start on the development process. Know which platform your audience is more active. Once you know about the process, it will become easier for you to fix the lead-time.

Are The Publishing Policies Correct?

You need to know about the publishing policies for both the platforms. In case of Android, the platform is much robust. It allows the user to update the app many times. Google Play enables you to update many times. Moreover, with the alpha and beta versions, developers can publish their app. From the business prospective, it is beneficial.

So, once you find the answers to the questions, you will definitely be on the competitive edge. Revenue generation is the primary thing for a mobile application development company. In both the platforms, the publishing policies are stringent. Deliver the best mobile app development service by following the rules.

Both the operating systems- Android and iOS have their strengths. Despite the tedious task of developing in iOS, it leads the race of app development. While one might argue that android provides better development framework. But the truth is that iOS remains the first choice. Developers use it to develop a mobile application. So, it depends upon your need to launch with in iOS or Android.

We’re an expert mobile application development company. We are capable of delivering robust mobile apps. Send us an email at [email protected] to get the best app solution.