iPhone App Development: Latest Trends That Will Add To A Developer’s Knowledge 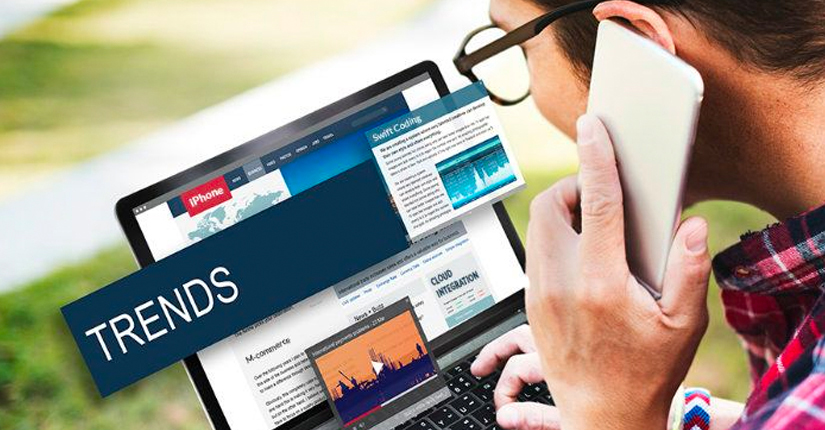 A report published by Statista suggests that till June 2017 about 180 billion iOS apps have been downloaded from the Apple store. The engagement level of an iOS app is such that it becomes a rage every time an app hits the iTunes store, it witnesses uncountable downloads. Games like Clash of the Clans and Temple Run were a rage the moment they were released. For developers or any other associated with iPhone application development, it is imperative for them to accustom themselves with the latest update in the app industry and the ongoing trends.

A unique app always aids to the revenue of any organization as this is the engaging factor that drives in users and develops the urge to download an app. Well, the app scenario is not the same as it was a few years ago. With the change in the taste and preferences of the people, the developers also have to adopt themselves in implementing the latest technologies and understand which things are creating interest among users to download your app.

Well, it is important to remember here that with the continuous need for an iOS app, the demand for the developers is also increasing day by day and will continue to rise even in the near future.

This blog is intended to make the developer’s aware about the ongoing trends that are currently prevailing in the industry. Keeping up with these trends will definitely help you to stay ahead in the field of iPhone app development.

Trend 1: Swift Coding Is On The Rise

Until recently, it was Objective – C which was the primary language used by iOS developers, but now the trend is slowly going to change now. The focus has now shifted to Swift. With improved frameworks and developed methodologies, this new language provides developers with a new set of X code tools to help them write more reliable codes. Apple has released even the second version of Swift that comes with more development friendly characteristics. It is not only good for iPhone app development but is of great help for developing other iOS products such as tvOS or WatchOS.

Ever since Apple has launched its very own personal assistant – Siri, it becomes the most prominent phenomenon worldwide. Siri has undeniably brought a foremost boost in Artificial Intelligence (AI) and contextual learning. It’s capable of understanding what people are searching and speaking.

In addition, it has helped a lot in discovering answers to essential inquiries. What’s more, it offers a GPS stick, which encourages you to get an entrance to the Citi Mobile App offering service as the task manager.

Along these lines, now you can comprehend why it has swung to wind up most loved and will stay in spotlight inside the next years.

So, one of the discussed patterns that iOS application designers need to keep an eye out for is Core Machine Learning or Core ML. It is a machine learning system propelled by Apple and has been demonstrating powerful for tasks identified with Camera, QuickType or Siri.

Presently, what the engineers need to do while writing iOS apps? It only highlights a basic assignment of adding a couple of codes to upgrade the security of the application and enhance its features. The Core ML will offer a level of correspondence pertaining to all iOS devices with its vigorous library. Besides, it will likewise be helpful in face recognition understanding the language and building up the AI-based games. The developers will grow exceptionally intuitive applications.

Consequently, one can state that it will be an amusement changing resource, particularly for the gaming applications. Also, as per a review, diversions are the most prevalent application classification by volume in Apple App Store (around 25%).

Expanded Reality has been imperative for the iOS mobile application development engineers and with Apple revealing the iOS 11 in September a year ago and 11.3 as of late, the focus has moved to ARKit.

Presently the question is what the reason for releasing the ARKit is. To answer the inquiry, it will overwhelmingly help in creating 3D and virtual reality-based mobile applications, which have picked up catalyst nowadays. Actually, ARKit will likewise get plentiful help from Amazon’s Sumerian application platform.

What’s more, ever since Amazon has held hands with Apple’s ARKit, different business associations are likewise indicating unmistakable fascination to do likewise. In this way, the present year 2018 will be productive for the AR and VR applications.

Did you realize that the greater part of US organizations will have in excess of 10 committed applications set up by 2017? This is a clear indicator of how enterprise app development might be for iOS application designers in the years to come. The flood in big business applications has been founded on two columns – constant client commitment and connection, and dynamic management of tasks and information:

There’s adequate space for iOS application designers to consolidate the best of huge information, IoT, and iPhone app development services to make cutting-edge applications in the years to come.

As Google presented Google Wallet, Apple has launched Apple Pay, a computerized online mobile wallet utilizing which the iOS clients can make simple payments. What’s more, it will support every one of the iOS gadgets including iPad, iPhone, iOS watches and MAC laptops.

Kindly don’t get worried about security issues; it is exceedingly anchored and you can make your purchases hassle-free. We should get down to some helpful insights.

As indicated by the detail, there has been a mind-blowing climb of around 500% on transactions utilizing Apple Pay. What’s more, a similar site additionally expresses that around two million private companies have acknowledged receipt utilizing Apple Pay.

You can book your flight tickets and direct conduct hotel reservation. It’s more fascinating that you can send or receive cash through messages. This makes it genuinely one of a kind.

As said before Apple hasn’t bargained on the security front. Thusly, the iOS developers can without much of a stretch execute Apple Pay in their application. The power of security can be considered from the way that here in Apple Pay you don’t have to store your charge or credit card information. In this way, it will run for quite a long time to come.

It will be an exaggeration to cite that you haven’t found out about the inventive AR technology cooperated with GPS that drove the notoriety of the Pokémon Go diversion. iOS application developers have, through this diversion superbly mixed the highlights of AR and GPS, making space for some more innovations to emerge. By 2018, you will observer commendable outcomes that will surface as navigational functionalities and area following highlights that make mobile handsets the all-powerful devices to help organizations working in automation and retail spheres to benefit as much as possible from GPS-controlled iPhone applications.

With the progression of time, the cross-platform applications have become dim and they are getting substituted by new and propelled apparatuses including NativeScript and React Native and so forth. This will help a lot in illuminating issues identified with execution and user experience.

There has not been quite a bit of advancement in the iPad app development. Be that as it may, as far back as the presentation of Qualcomm, a sort of chipset, iPad applications have the lift with the improvement of battery life.

The changes generally occurred because of the developing competition in the tablet business thus 2018 will observer new applications loaded down with new highlights.

Trend 10: An Alternative To iBeacon Is Necessary

Best iOS App Development Company in New York that is involved in mobile app development is concerned about tracking the location of their user’s app. It helps them to bring more personalization in their apps, but iBeacon doesn’t prove to be much helpful as it juices out the battery too fast. This causes irritation among the users. Hence, developers are now looking another alternative to iBeacon which can help a company to track the location of his or her app easily. Another problem is that Beacon batteries don’t last longer, they tend to get exhausted very soon. So, there’s a need for a better solution to it.

The need to develop more security in an M-Commerce platform is a dire necessity today as most of the people use their Smartphones as the only means to conduct all their online activities. The developer should be able to embed high-end security features in an iOS app in order to ensure that there is no security breach. According to a report by Gartner, it was revealed that 75% of all the mobile apps failed to meet the basic security needs. Apple has henceforth set new standards of security. Developers, therefore, need to understand the need for maintaining the maximum security and implement this while making an app.

In order to access apps in the future, it is necessary to integrate it with Cloud. One of the primary benefits of synchronizing the app development process with Cloud is that it can easily reduce the app size. Currently, there are two kinds of iCloud storage facilities – Key-value storage and iCloud storage document. Key-value storage is mainly used in order to discrete values like settings, simple app state, and preferences. On the other hand, while writing apps for iPhone, an iCloud storage document is mainly used as file-based information like complex app state, drawings, and documents. With the help of Cloud Kit storage, one can easily manage the structured data in the cloud and also share them at the same time.

The world is moving ahead towards a more advanced era where the internet will be connected with the durables of our house, thus making Internet of Things a popular thing in the universe. In the near future, developers can expect that Smartphones and tablets to be synced with the extension of an iWatch may be. Developers need to know on how to implement the extensions of the watch and other objects in IOT. It will play a crucial role in iPhone app development.

In the coming years, most of the apps are going to be free. Though this is not something which is unusual, but on the other hand, the developers have to be quite aware of the latest marketing trends and must be able to advertise their mobile app well in order to convince the users to use the app. This will include apps for both games and e-commerce as well.

A plenty of devices and operating system of Apple awaits, be it iOS 10, iPhone 7 or any other devices. With the release of the subsequent versions, the need to know the latest technologies will arise and hence the developers will have to consistently update themselves in order to stay ahead of the competition prevailing in the iPhone app development market.

We offer end-to-end iPhone app development solutions for all kinds of iOS versions with zero bugs and issues. If you want to hire iOS developers in NYC Contact us today. All you need to do is send us an email at contacts@unifiedinfotech.net and we would be happy to work for you.