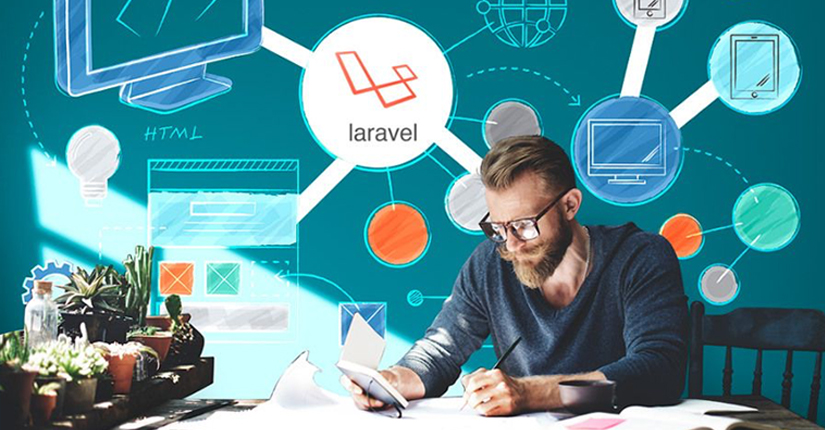 Gone are the days when developing a web application meant spending endless hours behind writing complicated codes. The new age coding is full of fun and is more expressive. It is something that is creating more interest among the web developers. Programming has been through several changes since it’s beginning, when it was merely used as a C language in web app development. The presence of technology today acts as a catalyst in implementing a complex idea into simplified solution with powerful web application.

Everyone is obsessed to be at the front end when it comes to leading the race amongst so many website design and development companies that are slowly coming up across everywhere. As far as the PHP frameworks are concerned, Laravel is the first preference of the developers and it equips them with a strong weapon to develop large-scale web applications with an extensive use of powerful coding.

Empowering Web Apps To The Core

The best programming results come when there is a strong framework and Laravel acts as a catalyst in infusing more power in a web application. The web app development speed of the frame work along with improved scalability and the presence of multiple powerful tool makes it the best programming tool that a developer has ever used. It can be termed as ‘a power booster tool’ in developing all the web applications.

This is how it’s done…

Simplifying Template Engine: Laravel comes loaded with built in lightweight templates. These help the developers to make beautiful layouts that come with dynamic content seeding. The use of JS and CSS codes in the widgets makes this framework equipped with solid structures. Hence, if you want to make a web application with simple layout and multiple section, then Laravel is the most appropriate framework for you to use in web app development.

Easy Project Handling With Artisan: Artisan is a command line tolls that comes with Artisan and is very effective in working with any kind of project environment. The benefit of such tool is that it performs the major programming tasks that most of the developers tend to avoid. Other unique benefits of Laravel include creating a skeleton code, managing the structure of database and creating their migration to another place. Not only this, a developer can also send MVC files with the help of command line. This can in turn help to manage the assets along with their configurations. Last but not the least, Laravel enables developers to perform unit tests.

Faster Object Relational Mapping: Instead of undergoing the hassle of writing SQL codes, Laravel allows the developer to issue database queries with the help of PHP syntax. This is done with the help of ORM or Object Relational Mapping, which consists of a PHP ActiveRecord Implementation. The presence of Object Oriented libraries are one of the unique things in Laravel. You will not find it any other kind of PHP frameworks. The pre authentication library is easy to implement and includes the most sophisticated features such as Cross-site Request Forgery Protection, encryption, Bcrypt hashing, password reset and the facility of checking active users.

Latest Modular With Great MVC support: Do you know that Laravel is built on 20 libraries which is sub divided into many modules? Yes, this another great feature of the framework. It is due to the presence of these modern PHP elements that makes this framework to make robust web applications, which are responsive and handy. The MVC architecture provides yet another strong support. It improves the performance of the web app thereby allowing better documentation.

Better Migration For Databases: Whenever you are using Laravel, you do not have to recreate the database structure of the application again and again. This amazing framework allows you to expand the database structure without the risk of losing the web app development data. Apart from helping the developers to change the structure of the database, it also helps them to make use of PHP code instead of writing SQL code. ‘Laravel Schema Builder’ is an important feature that enables developers to make database tables and enter columns with indices easily.

Facilitating Unit Testing: Now, Unit Testing is the reason why developers love to use Laravel. It conducts thousands of tests in order to ensure that any modifications or changes done by developers do not disturb the structure of the web application. Moreover, you can also take the help of this framework to write your own codes for unit testing.

Laravel can be an excellent tool that can team up with any kind of framework and result in rapid prototyping. Well, BootStrap makes it possible in just three simple steps.

Before prototyping it is important to sketch a wireframe in order to get a rough idea of how the application is going to look like finally. Making wireframe or project mockups will help you to will not only ensure that you have a great web application plan, in fact it can also save a considerable amount of money, thus resulting in cost benefit analysis.

Install Bootstrap in your system. Doing this will help you to prepare a responsive layout, maintain consistency and design the web application in an easier manner. Bootstrap also consists of many JavaScript components such as Modal windows, tabs, toolpits, carousel and collapsible elements. In order to install Bootstrap in your project, install the bower and the npm file of bootstrap first. It would be better if you can use BootstrapCDN

This is the last and final step. Here, you can choose a theme and use the existing code in order to prototype.

In order to give you a clear overview on how Laravel facilitates in rapid prototyping, we present you a video.

As far as enterprise application development is concerned, Laravel has a bright future ahead. It’s simplicity and easy to use features make it the most popular framework among the developers. Whether it is about managing the work interface workflow or the need to make responsive web design, Laravel can easily accommodate itself in any kind of environment used in web app development.

We provide end-to-end web app development services catering to all kinds of industries starting from hospitality to real estate and healthcare. If you are interested in developing a web application powered by Laravel, then send us an email to sales@unifiedinfotech.net and we assure you of making a robust web app.