Top 10 App Monetization Ideas That Will Make You Money. Vol 2 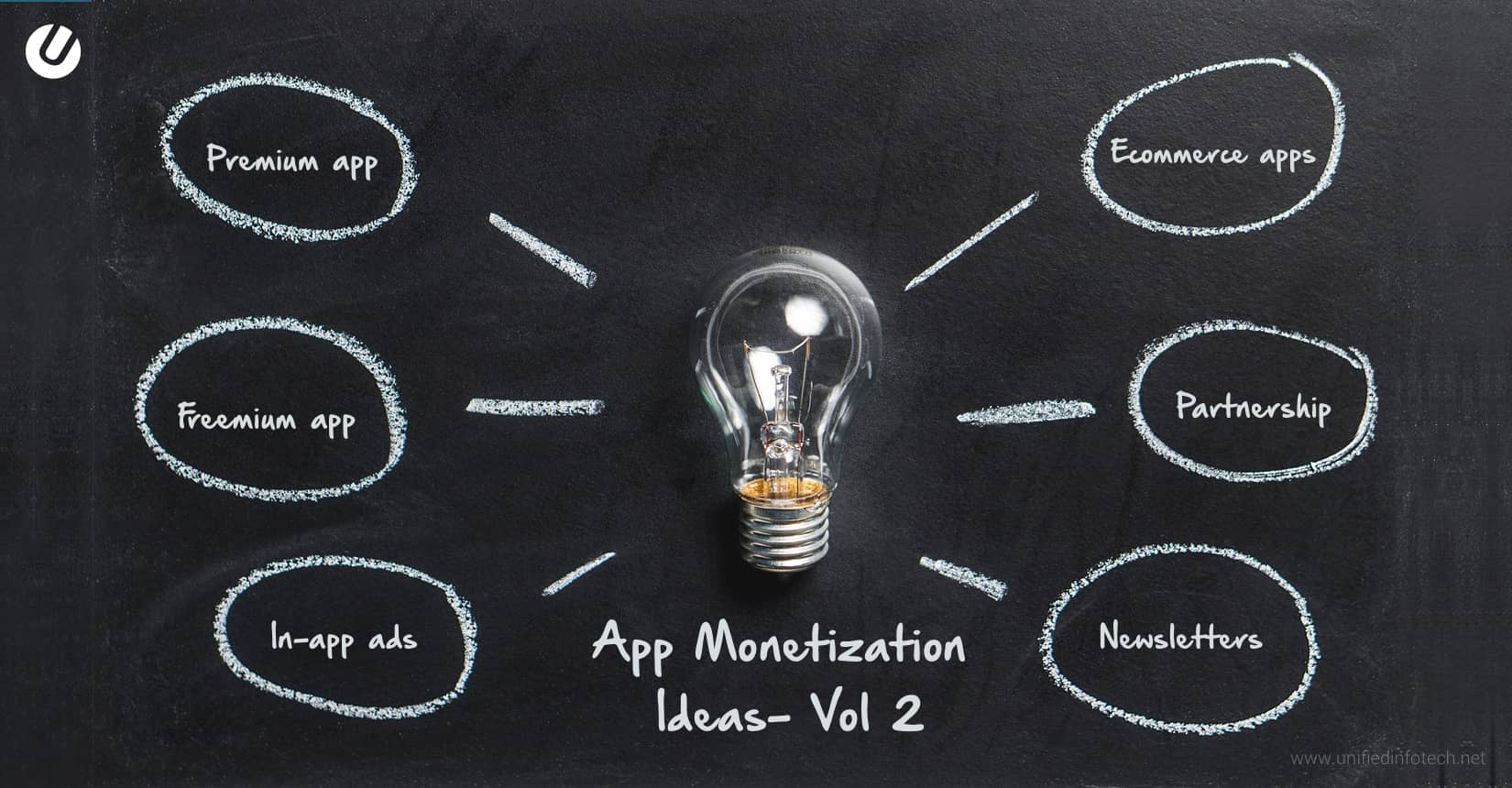 Since you are here, you must have figured out how to make an app. And now you are looking to make money out of it.

After reading all about app monetization strategies, now you definitely want to know all about the working ways of monetizing your apps. There are many ways of doing just so, but before we tell you about that, you need to know something.

Even though there are different app monetization ideas you can use to monetize your apps, you can’t blindly implement them. Just because one monetization technique earns more money than the other, it doesn’t mean it is going to work out for your app.

Now, let’s move onto explore the ways you can make money with your app with these proven app monetization ideas.

The Various Ways For You to Monetize Your App

So, you know all about how to make your app worthy of monetization and which platform is best for making money with your app. Now we are going to talk about some app monetization ways.

You can get steady revenue streams for apps by using any of the following app revenue model, based on the compatibility with your app. Some of these mobile app monetization models have been here since the genesis of smartphone apps, some are relatively new, but they all have one thing in common- any of these can help you make money through your app. So let’s look at how to make money from the app.

One of the oldest of app monetization ways paid apps have been here from the beginning. It is the very first app monetization models used by app developers. By principle, ad monetization strategy is very simple. Whatever app you have, you can launch it on the app store, and put a price on it, meaning that when people try to install your app, they have to pay a price for it.

It is a surefire way of making money with your app. Whatever the price is, you get to keep 70% of it while the app store takes 30%. But, this is also one of the oldest and backdated way of making money through the app. Let’s face it, even you don’t like paying for an app. If there is a similar app which is free, you’d probably opt for that instead for a paid app. And most of the people out there are like that. While some may pay for an app, most would rather install a free similar app.

Then again, if you are sure that your app is the best out there and it is worth paying for, then go ahead and put a price on it. Once everyone starts paying for your app, you’ll start to receive money for it straight away, making up for all the effort and cost you put into developing the app.

2. Try The Freemium Before You Buy The Premium

Doesn’t the word Freemium sound fun and interesting? Well, the concept of freemium apps is one of the interesting ones among app monetization ideas. It is basically a free trial version of your app. The users are going to download this version, and if they are satisfied with the entire app, they might buy its premium version. This ensures freemium app revenue for your app idea.

Freemium is by far the best app revenue model. It gives the users a taste of your app before you ask for them to pay for it. Most users are going to wonder whether your app is worth paying money for or not. With the freemium app, you can clear their doubts.

There are a few options you can choose from if you choose Freemium to monetize your apps.

Ever got stuck on that one level of candy crush, with no lives left, but with this fierce urge to finish that level then and there? Yeah, we all have. Thankfully though, the game offers this sweet feature where we can pay a small price to get our lives back (the game lives of course.) and the implementation of this feature is called in-app purchase.

The premise is simple- you offer some features within your apps, which need to be paid for. If you have a gaming app and want to use in-app purchase in your app try the following ways-

Not only for games, these days a lot of apps offer in-app virtual currency you can buy with cash. Later you can access special features with those in-app currencies.

For example, online book reading app Radish fiction offers the virtual currency or “coins”. You can buy these coins with real cash, and then use those coins to unlock new chapters of your favorite book.

When your app becomes popular, advertisers will pay you to put their targeted ads on it. While doing this is fairly easy, there is still one more thing to consider before you put ads in your app, the format of the ad.

There are three basic kinds of ad format you can use for your app:

The app ad revenue model has a few kinds of ad format for you to choose from. Different kinds of ads are going to affect the revenue you are going to generate through the app.

The best thing about native apps is that they don’t bother the user. After such a long experience of loud and flashy in-app advertisement, our eyes automatically avoid anything that doesn’t seem to be a natural part of the app. This is where the native app works best.

It seems like a natural part of the app, so it has a better chance of getting noticed. The user will probably think it is part of the app and check it out.

Now, you want to make money with your app, but also want it to be in a way that doesn’t bother the user or makes it inconvenient for them. E-commerce apps are the best way of doing that. In the fourth quarter of 2017, e-commerce sales in united states reached a record number of $131 billion. The biggest player of them all, Amazon had almost 200 million unique visitors across all platforms. This is all the proof you need to start working on your own e-commerce app to earn money with it.

The users could download your app for free while spending money on the goods offered through the app. Apps such as Amazon, eBay, Etsy, these apps provide the users’ easy way to shop while at home. It is the cleverest of all app monetization ideas. So if you want to develop an app and then want to make money with it, consider developing an E-commerce app.

Do you watch your shows on Netflix? Or on Hulu? If you do then it means you have a monthly subscription to the streaming service, and this is another way of making money through apps.

For a small monthly payment, you can offer your users access to the updated contents on your app. This model is very useful for music and video streaming apps, newspaper and magazine apps.

Even though this model makes sure that the revenue streams for apps keep flowing steadily, it is not for any and every app. You need to keep updating the app and offer new features and content to make sure that your users have a reason to come back and renew their subscription every month.

7. Partnership With Other Apps

You can partner with other apps and use them as mobile app monetization platforms. You don’t have to make a partnership with a very successful app right away. But making a partnership with another app and getting advertised on each other’s apps will make sure that both your apps make money.

Using popular mobile app monetization platforms like Facebook, Twitter is an effective way of promoting your app to hundreds and thousands of possible users, who may end up installing your app.

8. Use The Power Of Newsletter

Having a newsletter is an amazing way for you to get new users and leads. You can regularly update the audience with what is new with your app, what new features they can get by paying for it.

This is one of the better monetization models for apps and their owners, who are trying to get more traffic for their websites. Provide the users with new content from your blog/website on your app, and they are definitely going to visit your website for more.

9. Analyze User Behaviour to better your chances of monetization

You have launched your app, and have your first hundred or thousand downloads. That’s great, but the catch is that only 3% of your entire user base is going to come back to your app after one week. So what are you going to to get the rest of the users back?

In order to retain the users you have and gain new users, you need to analyze the user behavior data. Through this, you will get a clear understanding of what part of your app the users like the most, and which part causes them problems. Understanding this is going to help you to make improvements and expand your user base.

10. Sell Your Source Codes And APIs

This is more of an alternate way for you to make money with your app. If you have dedicated enough time and effort into developing your API, to the point that it is the best in the market, then you can make it a paid API, which basically means that when other developers use your API, they pay you for it.

Here is one of the most shocking app monetization tips you can ever receive:  you can sell your app once you’ve perfected it and want to move onto your next better and bigger project.

It may sound shocking, but this is the best option if you want to move onto your next project. There is no point in weighing yourself down with the continuous maintenance of the old app. There are many services you can sell your IP and code of the ‘old’ app and then start working on your next app.

Firstly, don’t fixate on one technique. Not all monetization models for an app are going to work for you. If it is not working, then move on and try something new. Remember that it may not always work.

Thirdly and lastly, the key to a revenue stream for apps is to make your user base happy. Ultimately, it is they who are going to make or break your app. If they are not satisfied, you won’t be making any money at all. So design and develop your app in such a way, that it becomes an integral part of their life.

Have an app idea? We can help.